The title drought in Hamden is finally over. For the first time in the school’s 86-year history, and the five years of the program, the Bobcats h ave a national champion, as the women’s rugby team edged Army in the National Collegiate Women’s Varsity Rugby Association (NCWVRA) championship on Sunday by a final score of 24-19. 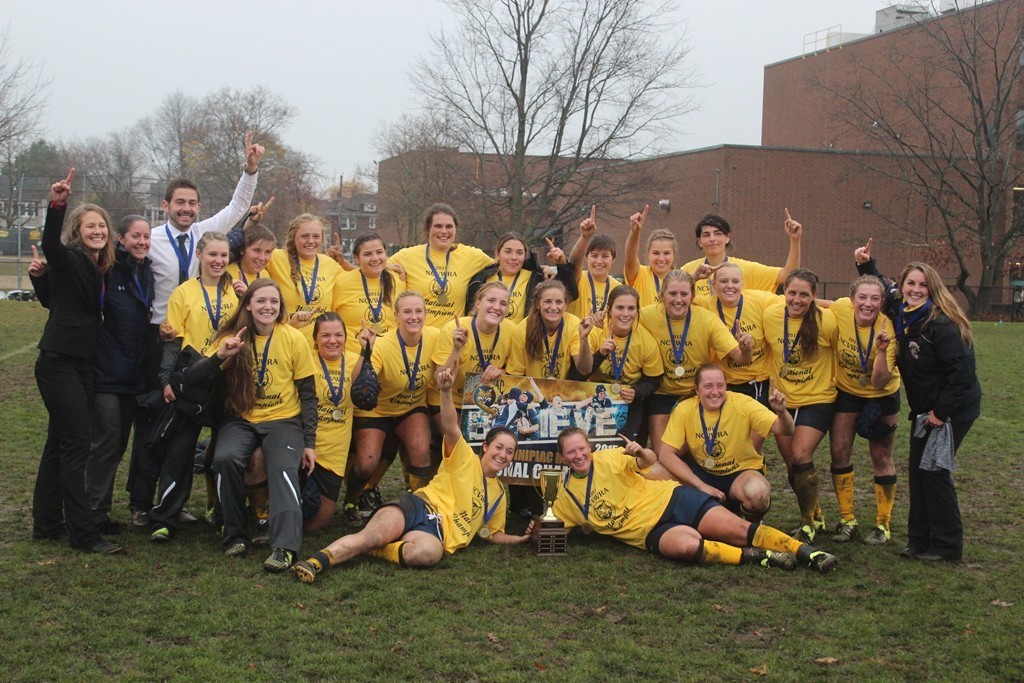 The Bobcats came into the title game with a wave of momentum from a five-game winning streak. During that stretch, Quinnipiac played consecutive games against West Chester. The team won 100-10 the first outing and 84-7 the second (the last game of the regular season and first game of the postseason).

Head coach Becky Carlson described how she and her coaching staff kept their players from becoming complacent during the playoffs after such large margins of victory.

“I told them they were the most unfortunate team in the tourney to not draw the most competitive games in the opening rounds, because every other team was using close games to learn from,” Carlson said. “Since we had those first games that only allowed us to stretch our offensive legs, I told them we were working on nothing but defense the next three weeks because that was what would earn us the championship.”

Quinnipiac and Army split the season series 1-1 heading into this weekend’s national title game. Army handed the Bobcats their first loss of the season on Sept. 12, and the Bobcats’ only road loss, by the final of 29-24. The Bobcats avenged that loss, topping the Black Knights 20-12 at home on Halloween.

Quinnipiac was the first team to get on the scoreboard on Sunday, taking a 5-0 lead thanks to a Emily Roskopf try. Unfortunately, Army responded a mere three minutes later with a try of its own. With the Black Knights’ successful conversation,, Quinnipiac found itself behind 7-5.

The two sides each ended up scoring one more try during the opening 40 minutes, Quinnipiacand the trailed 14-12 heading into intermission. Carlson described what she discussed with her players during the break.

“There was nothing to tell them, except to keep playing the way they were. It was everything we loved in competitive rugby with plenty of offense and defense,” Carlon said. “The only message we wanted to send them was to tighten up their play, and to have more precision with the ball because of the rainy conditions.”

With just 40 minutes left in their season, Quinnipiac looked to settle down and play its way back into the game. The Bobcats accomplished this goal, as a Raechel Stimson try Quinnipiac put Quinnipiac up 19-14 lead within the first five minutes of the second period of play.

While Army eventually tied the game at 19 all, the Bobcats halted the Black Knights’ momentum in the final five minutes of play. Roskopf’s second try was the game-winner.

Carlson described how important Roskopf’s performance in the game, both offensively and defensively, was to the final outcome.

“[Roskopf’s] absolutely saved two tries,” Carlson said. “She stormed across the field after two of our players missed a tackle, and all but stripped the ball from the opposing player. If she doesn’t make that tackle, and another similar one in our own zone 10 minutes prior, we aren’t national champions.”

Another player who was key for the Bobcats was sophomore Mason Johnson. Johnson, who played 10 minutes of the championship game with a partially torn MCL, led the team with two assists and was named Most Valuable Player of the tournament.

“I was both surprised and honored to be named MVP,” Johnson said. “I’m shocked they could even pick out an MVP, because of the great play of us as a team. This championship was a complete team effort.”

The national championship victory brings a conclusion to what has been a dominant season for the Bobcats. They finish the year with an 11-2 record, including a 6-1 mark against NCWVRA opponents, and a six-game unbeaten streak.