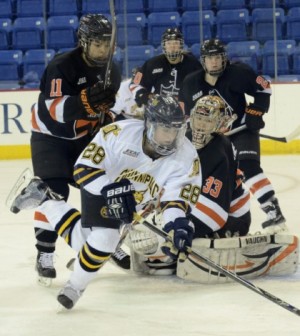 Following a 7-0 victory in the first game of ECAC Quarterfinals series against Princeton (15-13-2) the previous night, No. 6 Quinnipiac (25-7-3) looked to finish the series in Game 2 on Saturday afternoon at High Point Solutions Arena.

Quinnipiac did just that, downing Princeton 2-0 to move on to the ECAC Semifinals.

“We figured out [we] needed to improve on the little things, and we then we pulled it together against Princeton, arguably the hottest team in the ECAC going into the playoffs,” Quinnipiac head coach Rick Seeley said. “I’m very happy with how we played.”

The Bobcats started the game showing momentum from their previous win, outshooting the Tigers 11-3 in the first period. Shiann Darkangelo had her goal overturned with 4:03 left in the period, which would have given Quinnipiac a 1-0 lead.

Quinnipiac took advantage of a Princeton penalty early in the second, however, as Nicole Connery tucked a Taylor Cianfarano pass into the bottom right of the net for her 13th goal of the year.

Princeton goalie Kimberly Newell had 34 saves just a day after giving up seven scored to the Bobcats. Newell made an athletic grab of a would be Darkangelo goal in the second period.

“[Newell] came out and played an amazing game, and made the saves I expected her to make,” Connery said. “After playing with her in camps for years, a game like the first one surprises me. Today, she was catching all the saves she should make, as well as stopping ones with the smallest parts of her equipment that we thought should have gone in.”

Meanwhile, the Tigers were only able to manage to get off 11 shots in the last two periods of regulation. Nicole Brown scored her 3rd goal of the season with 12 seconds left, after Newell had been pulled, to secure a 2-0 win for the Bobcats.

“I thought we followed up yesterday’s game with a good effort, and we are real happy with a 2-0 win,” Seeley said. “When you run into slumps, you are never sure why. So we watched a lot of video, we actually showed them every goal we have scored this season, and how they made those happen.”

Laden is now one shutout shy of tying former Minnesota goalkeeper Noora Räty’s record of 17 in one season. Additionally, it came in Laden’s final home game in a Quinnipiac uniform.

“There were a lot of emotions tonight,” Laden said, “I was very happy, and I couldn’t have been more proud of my team, and as a senior there is no other way I would have liked to end out my home career.”

Up next, the Bobcats prepare for No. 4 Harvard (25-5-3), the one team they have yet to defeat in ECAC play this season.

“We’ve played Harvard tough both times this year, and in both cases we were up one goal, and we gave up a weak goal relatively after.” Seely said.

“If we go up 1-0, it has to be a one-nothing game and we have to understand that. This is where we wanted to be this season, as part of the final four of the conference, and we are prepared for the two tough battles we have ahead of us.”

The Bobcats travel to Cheel Arena in Potsdam, New York to battle with the Harvard next weekend