Sam Anas has hit the ground running as an underclassman at Quinnipiac.

This year, the sophomore forward is building on the momentum that began during his award-winning freshman season, where he earned the Tim Taylor Rookie of the Year award.

Following his freshman year, in which he led the team with 22 goals and 43 points, Anas has already recorded 10 goals and eight assists for a team-leading 18 points in the 2014-15 season.

Anas shared how he has been able to have such a smooth transition to the college game.

“I think the coaches have given me every opportunity I could have asked for, especially as a freshman,” Anas said. “I was able to play power-play [my freshman year], and play on a line with Connor and Kellen Jones. Now this year with [Matthew] Peca and Landon [Smith], I have just been surrounded with talented players.”

Additionally, Anas credits the two years he played amateur hockey for the Youngstown Phantoms of the United States Hockey League as a key in his transition.

“I loved playing junior hockey,” Anas said. “It is a good transition between playing youth hockey and making the jump to college. Had I gone from youth straight to college it would have been very tough, but instead I was able to play in the same place for two years with great coaches.”

During his two-year stint in Youngstown, Anas scored 54 goals and recorded 43 assists for 97 total points in 155 games. He finished third in the league in goals during the 2012-13 season. 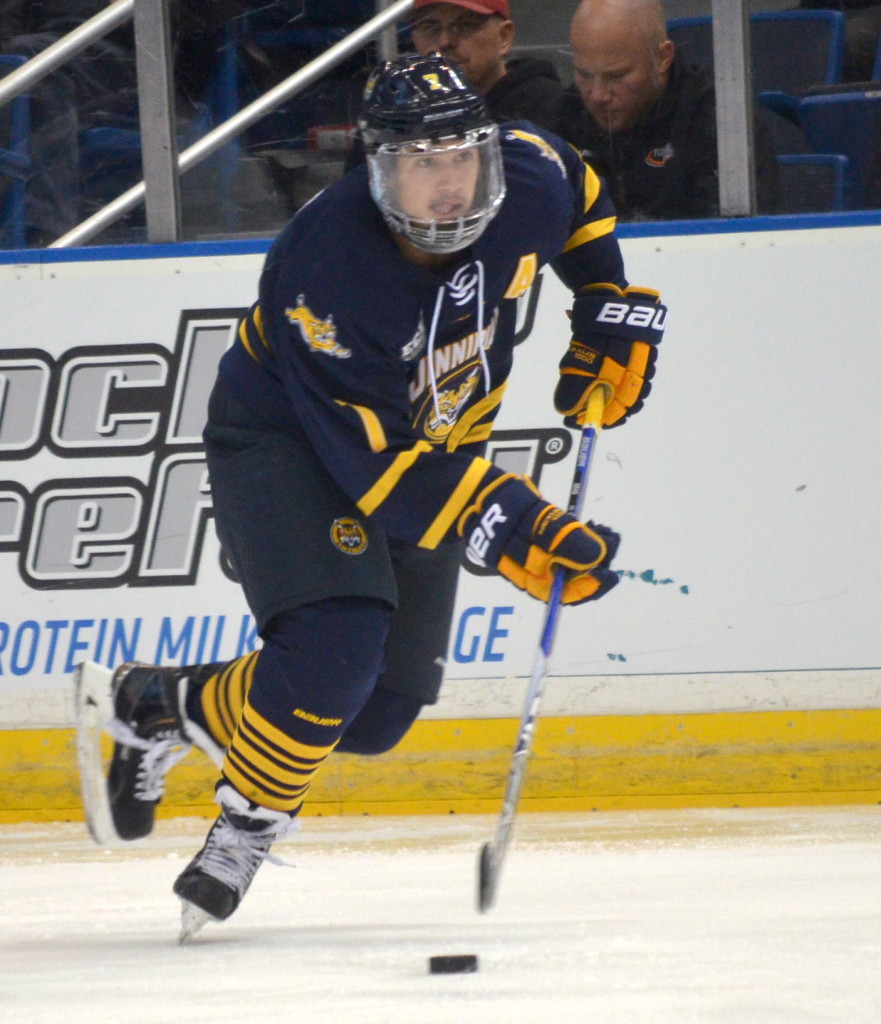 In a conversation about his leading scorer, Quinnipiac head coach Rand Pecknold reflected on what a special player Anas is, and how much he adds to the team.

“He is a highly talented player, who has a unique ability to create time and space for himself, but his biggest strength is his finishing,” Pecknold said. “There are players who can score goals in practice when you have the time and space with little to no pressure, but few thrive like him in game mode.”

Senior captain Matthew Peca, who centers the first line with Anas and Smith, talked about what it’s like to play with the second-year wing.

“[Anas] expects to score every night and he produces, it’s very fun to have him on your line,” Peca said. “You can always expect him to be open. He talks really well, you will always know where he is on the ice, and when he has the puck he makes plays.”

Peca added that Anas isn’t only a great scorer, but a great passer, too.

“He’ll pass through defenders sticks on feeds and you always have to expect the puck,” Peca said. “He is great with the puck; there are other players who won’t even try the things he can do.”

Peca said Anas is a leader off the ice, as well.

“He does a good job keeping the locker room loose, with little sayings and stuff, and he is just a great teammate,” Peca said. “I roomed with him on the road last year, and he is real easy going and a great team player.”

Anas first began playing hockey with his dad, Peter, early on in life. Peter played at the University of Western Ontario, and introduced the game to Anas at a very young age.

“[My dad] got me started when I was two years old shooting the ball around in the kitchen,” Anas said.

Nineteen years later, Anas’ talent is drawing NHL attention. In the past few summers, he has participated in developmental camps with the Washington Capitals, and most recently with the Montreal Canadiens.

Training with the Canadiens last summer was an “eye-opening experience,” he said.

“To go there and see all of the history there, and all of the Stanley Cups they have won, it is such a prestigious organization,” Anas said. “It really motivates me to make that jump to the NHL one day.”

Anas said that he doesn’t model his game after one specific player, but that he does enjoy watching Minnesota Wild left wing Zach Parise play because of his skill and hard-working attitude.

“He is a small guy who was undrafted out of college,” Anas said, “but has done everything people said he wouldn’t be able to do, and now he is going to be a Hall of Famer one day. He is a perfect role model for me.”

For Anas, he is looking to improve deficiencies in his game, while Quinnipiac as a whole has lofty goals set.