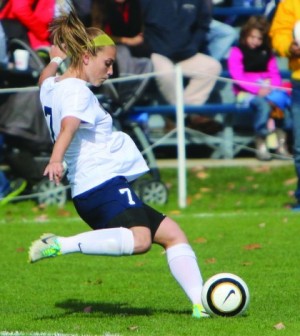 Fifth-year senior Taylor Healey has been on a collegiate roller coaster ride in every sense of the term. She faced all-time lows when she was forced to medical redshirt her freshman season due to an injury, then experienced the best of times as she was named Quinnipiac Women’s Soccer Player of the Year in each of the last two seasons.

Now a recent injury is forcing her to miss all of her final season. She has experienced it all.

Growing up in nearby Milford, Healey enjoyed major success at Lauralton Hall High School. She was named First Team All-State in 2010, as well as Third Team All-New England.

Healey committed to Iona for the following fall, but then realized she made a mistake.

“After speaking to [Head Women’s Soccer Coach David Clarke] and doing two overnights, I realized this was the far better fit for me,” Healey said. “School-wise and soccer-wise, I am very happy with that decision. I would not have liked it at Iona.”

Although she had a tumultuous freshman year, including an ankle injury and appendicitis that affected her, Healey bounced back and blossomed into one of the all-time greats at Quinnipiac.

The defender considers last season to be her best yet as a Bobcat, calling it her “personal highlight.”

“[She earned the Player of the Year award] for a consistency of performance, determination and for possessing every other quality you look for,” Quinnipiac head coach Dave Clarke said. “She brings it to the field for 90 minutes.”

There’s one part of her game, in particular, that makes Healey proud: her toughness.

The team watched a documentary about Wambach during the preseason, paying close attention to the tenacity she played with.

“I am the type of player who doesn’t leave a game without an injury. I go into everything and don’t second guess,” Healey said, comparing herself to Wambach.

In Healey’s sophomore season she suffered a head injury, one that would eventually need 37 stitches.

“She needed plastic surgery, but she was still attempting to stay on the field,” Clarke said. “Considering she was ambulanced to a nearby hospital, the toughness she showed by attempting to keep playing gave a true reflection of Taylor, both as a person, and as a player.”

Despite the tough persona she possesses, Taylor openly admits how she isn’t afraid to cry.

One example of this would be during a game against Central Connecticut State University during her sophomore year. Healey scored the game-winner on a volley from a corner.

“My coach had been joking during the week that ‘Taylor has no left foot,’” Healey said. “During the game I scored a volley off of my left foot, and I was so happy that I was literally standing on the middle of the pitch crying.”

Unfortunately, Healey’s career at Quinnipiac looks like it will end on a low note.

During the preseason, she tore two ligaments in her ankle and has been in a boot for the last five months. As she prepares for graduation in the winter, she spends three hours a day in the training room and rehabbing.

“Since [my career] was taken away from me before I had a chance to finish it, I am going to attempt to play overseas,” Healey said. “I don’t know how realistic that may be but I am going to try.”