For women’s soccer freshman Nadya Gill, the transition to college athletics has gone without an issue. In fact, it’s gone better than she might have imagined.

“Despite coming a long way from home, I have had a very easy time adapting to college,” Gill explained. “My teammates and coaches are like my family, and any problem I have had so far they have been able to help me figure out.”

The Toronto native, who won’t turn 18 years-old until Sept. 26, has scored three goals in her first five collegiate starts. All three of her goals were game-winners.

Despite her individual success, Gill is quick to pass the acclaim off to others.

“All of my success starts with the play of my teammates. They are so helpful communicating and [coach Dave Clarke] did an amazing job teaching us the system we play in so it has been effortless,” Gill said. “Our build-up play really begins with [Natalia Grodzki] in goal, works its way up through our talented midfield, and I am just lucky to be able to be up top and finish it.” 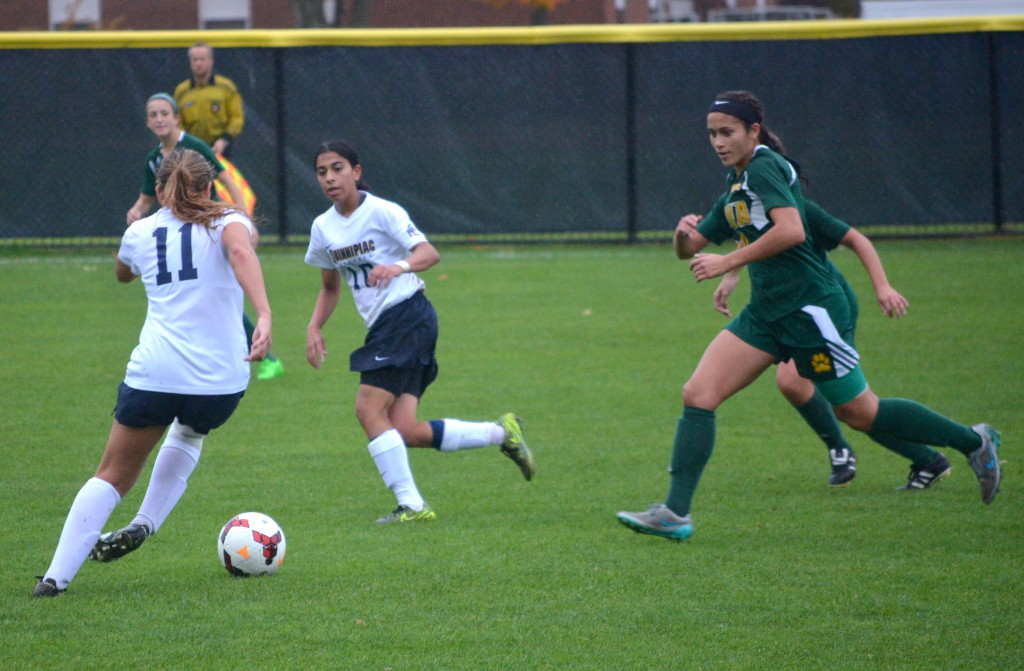 For Gill, this isn’t her first time making an instant impact for her team.

In 2013, at just 15, Gill played a major part in helping Team Canada bring home silver from the U17 CONCACAF tournament. In the tournament, the top teams from North and Central America, as well as from the Caribbean compete for a place in the World Cup.

Despite never starting for the team, Gill scored a goal in each of her four relief appearances. This time playing for the national team is an experience Gill will never forget.

“Having that experience playing for my national team was incredible, and really helped prepare me for many of the things I am dealing with now that I am at [Quinnipiac] University,” Gill said. “The feeling of playing and representing your country and knowing you have an entire nation of people is an incredible experience not many people get to have, and I feel beyond lucky to have experienced that in my life.”

It was this time playing for the national team that eventually put Gill on Quinnipiac’s radar. When it came to choosing schools, education was something that Gill really focused on.

“Nadya was a player we noticed in the Canadian national program as being undecided, but interested in coming to the United States,” Clarke explained. “When it came to her school, she wanted an Ivy League or somewhere very well respected because she wants to study law.”

With the school meeting Gill’s criteria, Clarke would use his connections in United States soccer to open the conversation with her and her national team coach.

“We reached out and talked to both her and her U17 coach, Brian Rosenfeld,” Clarke said. “And then she visited, took a look at the school, did some research and everything just fell into place.”

Gill has had instant success in her short tenure in a Bobcat uniform, but it isn’t a surprise in the eyes of coach Clarke.

“When you look historically at the best players in the history of the program—Furtuna Velaj, Sarah Lawler—they are all international players who hit the ground running,” Clarke explained. “When a good player is good, there is never an issue.”