Last season, Quinnipiac women’s ice hockey had its most successful season in program history. After going 26-9-3, and winning the ECAC Hockey regular season title, the Bobcats would go on to lose to Harvard in the national tournament. Despite the success, Quinnipiac would undergo a coaching change on Apr. 9, as officials from the school approached former coach Rick Seeley with several allegations, including that he had yelled at a student on the hockey team and grabbed her by her helmet chin strap.

Following the dismissal of Seeley, Cassandra Turner would be named the interim head coach, and has since been named full-time head coach.

Instead of having the change in leadership be a transitional period for the team, the Turner era has gotten off to a smooth start as the Bobcats are currently 4-0-1 on the season. For Turner, success is like second nature, as she has achieved it since her playing career at Brown.

During her four-year stint with the Bears, Turner won two Ivy League and two ECAC championships, as well as appearing in two NCAA Tournament National Championship games. Turner credits her time playing at Brown under head coach Margaret Murphy as what laid the foundation for her coaching style.

“[Murphy] really taught me how to get the most out of myself and find ways to reach further, and really challenge myself to not only be the best player I can, but to be the best person I can be,” Turner said. “It is that fundamental identity that she instilled into that program that there is always more, that has most helped shape who I am as a coach.”

“[Murphy] used to make jokes during my time there all the time calling [Morey] and I coaches in training, and would include us in on conversations that you would usually not include your players in, like ‘How would you defend this faceoff?’ or ‘What would you do in this situation?’” Turner explained. “I really enjoyed thinking about the game that way, so my coaches–even when I was a player–were asking me to take on added responsibilities.”

Turner said the extra responsibilities would finally help her realize she wanted to be a coach. The main experience Turner credits is when the Brown coaching staff entrusted her to teach a teammate, who had played for the US National team as a forward, how to become a defender. 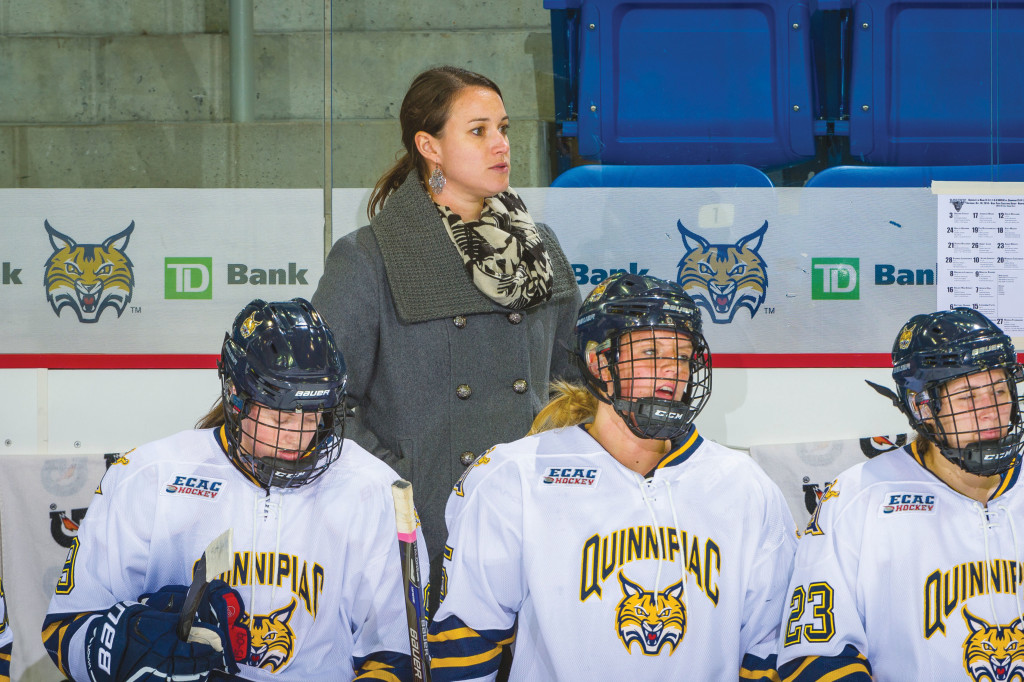 While the emergence of Turner may have surprised a few people, Quinnipiac Director of women’s ice hockey operations Paul Nemetz-Carlson has been one of Turner’s biggest advocates. A member of the Quinnipiac coaching staff for 13 years over two tenures, Nemetz-Carlson would give Turner her first coaching job, as a graduate assistant, at Division III Elmira College while Nemetz-Carlson was the head coach.

While at Elmira, Turner would again be a part of success, as the Soaring Eagles would reach a national semi-final, as well as win a Division III national championship. Nemetz-Carlson feels that Turner’s coaching instincts have been present since this inaugural coaching job,

“Her personality, her ability to connect to people, be it motivate or push them, or even her pedigree as a player, both during her career for Brown and with the Canada international team, all spoke in great volume about her,” Nemetz-Carlson said. “Not all great players become great coaches though, but everyone who spoke to Cass could tell you how different she was, and how differently she looked at the game than most people.”

Turner’s skill as a coach, especially on the defensive end, has been apparent throughout her tenure with Quinnipiac. This was especially prevalent last season, as a Turner-led defense would allow a mere 45 total goals throughout the season, the fewest in all of Division I hockey.

“Not only did we have the fewest goals in the nation, we allowed 100 fewer shots than any other team in the country,” Turner said. “We really stress holding onto possession, how we attack, and working on getting the puck back quickly.”

Turner attributes the team’s stringent defense to the attention to detail her players possess, as well as the culture of the locker room.

“It isn’t just me either, we will be between periods and I will hear girls on our team saying ‘come on everyone, zero shots allowed for the period,’ and whenever you have players that will take that on to themselves, you know you are in a good place with a winning culture.”

One way in which Turner instills this attention to detail in her players is by preaching the importance of hustle stats. Turner discussed the importance the team places on winning each period as its own game, measuring shots allowed vs shots taken, and keeping the team’s penalty minutes for the game under six total minutes.

“It was really cool to average six minutes or fewer of penalties per game a couple of seasons ago. It was an NCAA record previously, then we squashed it, when we averaged 4.3 penalty minutes per game over all of last season,” Turner said. “That number seems unattainable now, but if we keep our penalty minutes under six, and maintain our penalty kill, which is over 90 percent, we should find similar defensive success this season.”

A key area in which Turner has been able to aid the team in reaching these unheralded levels of success, is in her skills as a recruiter. Since taking over as the program’s recruiting director, Turner has been directly involved with the recruitment of 13 players who have gone on to win All-ECAC honors, such as captain Cydney Roesler.

While playing under Turner for Hockey Canada, Roesler was given a two week crash course in Turner as both a person and a coach over the two week tournament. Roesler said Turner’s enthusiasm to not only win, but to make everyone around her better was the major driving force that led Roesler to Hamden.

While working against Turner at Yale and then with Turner at QU, Nemetz-Carlson has seen Turner both as an ally and as an enemy when it comes to recruiting. Carlson described how Turner has a way of showing recruits how much she cares about them.

“She has a tremendous emotional intelligence that really helps her connect with people, and understand their needs,” Nemetz-Carlson said. “Her ability to articulate a vision for what we are trying to do has been really successful. With that competitive nature, it has helped us attract top tier players who are a good fit for the program both on and off the ice.”

Nemetz-Carlson went on to explain that the main quality that everyone in the program shares, is a dedicated vision of working hard, and winning the national championship that has thus far alluded them.

Roesler also described the perception her and her teammates have of Turner, both as a coach and as a mentor.

“Everyone knows that Cass understands so much about hockey, that we appreciate every piece of advice she gives us. It helps because every day we know as players we are going to get better under her,” Roesler said. “Off the ice, she is someone we can open up to and get along with. She is very big on having a very good relationship both on and off the ice, and I think that is really going to help us with chemistry both on and off the ice.”

So far through the team’s first five games, you could hardly tell there was a coaching change this offseason. Turner talked about what has made her transition so seamless and “fun,” but also pointed out where she wants improve.

“I am truly honored to have this position, and humbled to be a part of a program like this,” Turner said. “The support we have in terms of not only financial backing but in people makes the transition so easy and fun, and has put me in a place to be successful immediately.”

As for the rest of the season, Turner’s goal for the team is for them to figure out how to play their best hockey each day. Along the way to achieving this goal, Turner believes the team’s true potential will reveal itself, although she admits there are lofty goals in their crosshairs.

“There is no question our kids want to win a championship, and that is their goal,” Turner said. “As we progress, the first thing they want is an ECAC regular season championship, and from there we will see where it goes.”