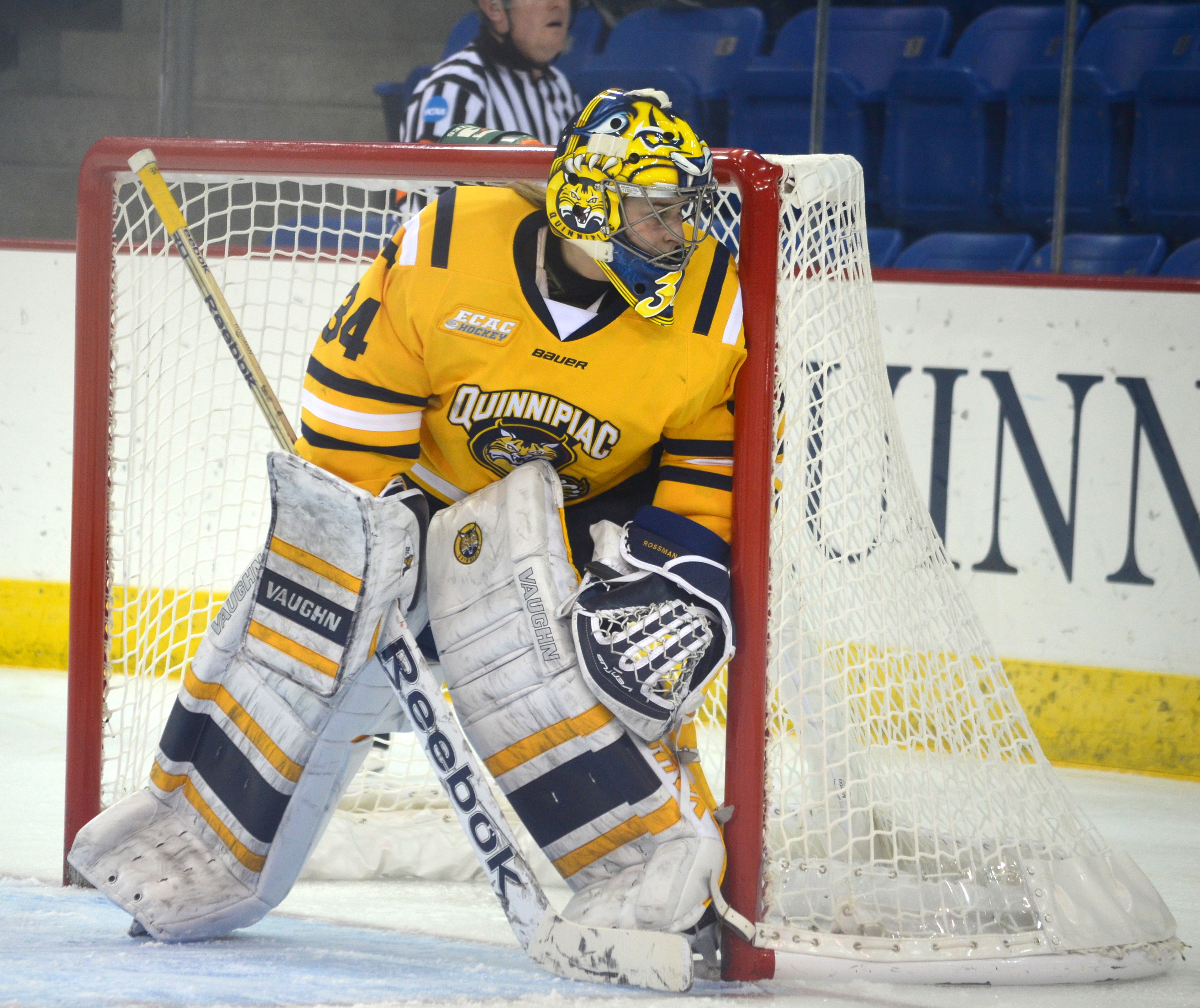 Few positions are more important to a hockey team than the goaltender. The goalie is captain of the defense and the player that has the most direct outcome on the final score. Having a good goalie is essential for any team that wishes to be successful. And in order to be a good goalie, you need to possess a high I.Q.

For Quinnipiac women’s ice hockey goalie Sydney Rossman, her intelligence has helped her find success both between the posts and in the classroom.

Rossman, a junior marketing major from Minnesota, graduated high school as part of the national honor society and has been named to the All-ECAC Academic Team in both her freshman and sophomore seasons at the collegiate level.

Rossman says while hockey is her passion, it is her academics that drive her, and that a desire for a good education is what would eventually bring her to Quinnipiac.

“Academics is huge. We are all students before we are athletes,” Rossman said. “I originally heard about Quinnipiac because of hockey, but it was the academic reputation that won me over.

Despite the chances of playing professionally now being an option following the inaugural season of the National Women’s Hockey League, Rossman wants to pursue a job based on her degree following graduation.

“After college, there is the opportunity to play in the [National Women’s Hockey League] now for women and the chance to go overseas, but ultimately my goal is to graduate with a good degree and have a good job.”

Quinnipiac head coach Cassandra Turner feels that Rossman’s intelligence has been a key for the goaltender’s transition to the college game.

While Rossman has always been an impressive student, her impressive goaltending skills are what drew the attention of the Bobcats’ recruiting staff. Over her four seasons playing for Minnetonka High School, Rossman allowed an average of 1.13 goals per game, and went 55-10-2 on the way to winning three AA state championships for the Skippers. Additionally, Rossman was named the top goalie in the state of Minnesota during her senior year.

Despite not starting immediately, Rossman was able to demonstrate her on-ice IQ and her desire to improve during her first two seasons on campus as she sat behind former goaltender Chelsea Laden, who has graduated and now plays for the Connecticut Whale of the NWHL.

Due to Laden’s presence, Rossman was limited to 12 appearances in two seasons, with only six of those coming as starts. In those games, Rossman was still impressive, as she went 4-0-1 with a 93.3 percent save percentage and allowed an average of 1.21 goals per game.

While the number of appearances was a small sample size, they were all games of large importance. Rossman shut out then No. 8 ranked Clarkson on Valentine’s Day, and started the program’s first national tournament game against Harvard on March 14th. While the team would go on to lose to Harvard, Rossman describes the game as a chance to grow as a team.

“I wish we got the result that we wanted to, but it was a learning experience,” Rossman said. “It helped me and my teammates learn what it takes to not only compete, but win at that level, so hopefully we will get there again this year and know what we will need to do.”

Rossman credits her time playing behind Laden during her first two seasons as preparing her for taking over as the Bobcats’ starter.

“Playing behind Chelsea I really learned a lot because we really pushed each other, so even though I wasn’t starting in games, I was getting that much better every day in practice,” Rossman said. “We both knew that whoever was playing, the main thing we wanted was for our team to be successful, so I would always cheer her on during her starts, and she would do the same during mine.”

Despite playing well in her limited game time the last two seasons, many wondered how Rossman would handle the transition to top choice goalie. Thus far, as the season has progressed Rossman has begun to make a name for herself around the country.

In her 17 starts this season, Rossman has gone 13-1-3, allowing 1.10 goals per game, the third fewest in the nation, as well as stopping .939 percent of shots she faces. Additionally, Rossman has five shutouts this season, including a program-record streak of 296:42 minutes without allowing a goal. 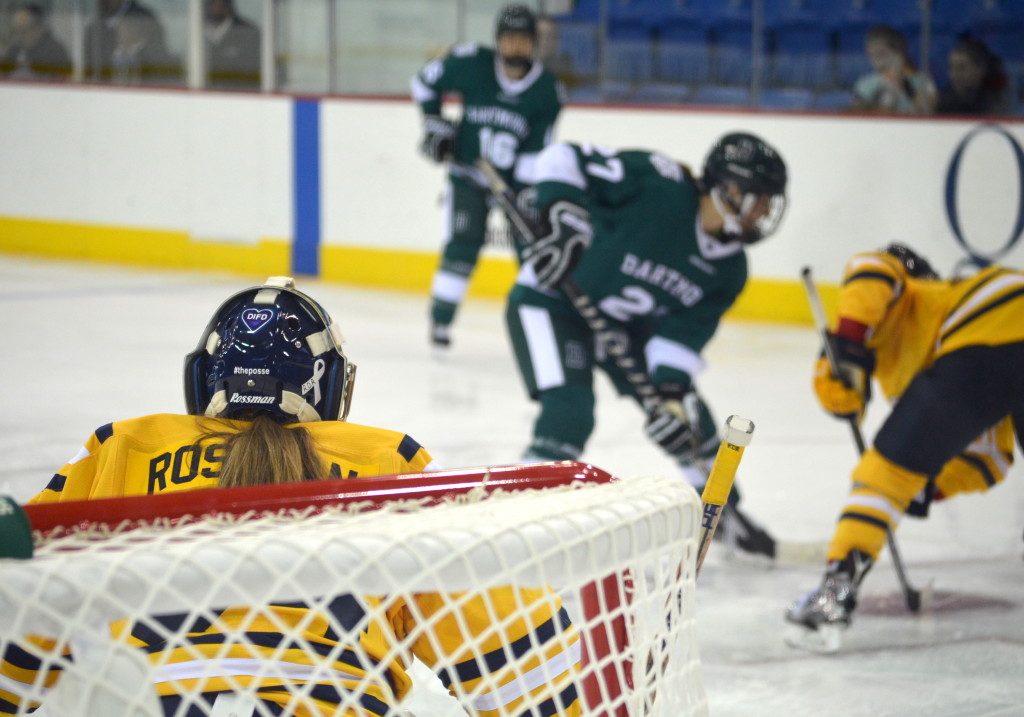 For Laden, there never a doubt that Rossman would be a successful starter for the Bobcats.

“[Rossman] was ready to play hockey from early in her hockey career, and she is still one of the best goaltenders I have ever seen or played with,” Laden said. “One of the most important traits she has is her work ethic. She works her butt off every day at the rink, and it pushed me to become a better goalie.”

Similar to Laden, Turner knew that with Rossman’s attitude and work ethic it was a matter of time until Rossman was one of the top starters in the ECAC. For this season, Turner and Rossman have worked on molding the junior into what the team defines as a “championship goaltender.”

“We talk about making key saves, like right after we score, or right after we get scored on. On the penalty kill, they are your best penalty killer,” Turner said. “A championship goalie is someone who can change the momentum, or save the team when they are needed and she has done that this year. I think about many big games and moments this year, and she has been there for us.”

One area in which Rossman has consistently showed up for the Bobcats this season is in overtime. In their 17 games, the Bobcats have had five games reach overtime. After tying in their first four overtime games, Rossman stopped 21 of 22 total shots and help the Bobcats win their first OT game 2-1 over rival Harvard on Dec. 5th. Rossman described what she does to prepare herself when she knows overtime is looming.

“Overtime is interesting because anything can happen in those five minutes, so I go into overtime like we have nothing to lose,” Rossman explained. “By doing that, it helps me stay focused on making every key save, and on at least helping my team get a tie. If they can score that is great, but as long as I don’t let one in I can help my team leave with one point in the standings.”

While Rossman is taking strides in the right direction, both she and Turner feel the junior has room to improve before reaching championship goaltender status.

“We need her save percentage to continue to improve, and our team defense to improve, but she is hungry to accomplish it,” Turner said. “Her hunger and desire to get better is contagious, and can prove to be something that pushes our entire team to get better.”

Another area of difficulty for Rossman is maintaining full concentration during a game, despite not always facing many shots. With the Bobcats currently allowing 18.5 shots per game, Rossman will sometimes go long stretches of the game without being called into action.

To help become accustomed to this, Rossman reached out to men’s ice hockey goalie Michael Garteig for advice.

“I talked to [Garteig] about how to stay focused in games when there aren’t as many shots, because he knows how hard it can be,” Rossman said. “I got a system of breaking the game down into five minute increments from him, as well as counting every shot that goes in on me, including the ones during practice.”

Should Rossman hope to make that last step to the championship goaltender status, she would be wise to heed the advice Garteig, Laden, and Turner have passed down to her.

Yet, with the desire to improve and win that Rossman has showed in the past, as well as the flashes of greatness she has displayed this season, Quinnipiac is optimistic that its junior goaltender can help the program achieve its ultimate goal of winning a National Championship.