There are few challenges more daunting than following in the shoes of a legend.

After losing Borja Angoitia, who graduated last year, many people are wondering how men’s soccer will replace the reigning Metro Atlantic Athletic Conference Goalie of the Year.

“I don’t feel any pressure taking over for Borja [Angoitia], I’m here to make my own legacy,” Henry said. “While [Angoitia] was great and made major contributions to this team, I am the one wearing the No. 1 jersey and the gloves now, so whatever happens now is up to me.”Through his first three games of 2015 transfer Triston Henry looks well on his way to creating his own name as Quinnipiac netminder.

Henry looks well prepared to start a great career of his own in Hamden. At 6-foot-1, Henry possesses blink-of-an-eye quickness and the vocal ability to control the Bobcats’ defense. His playing style, as he puts it, is inspired by his favorite player: Juventus F.C. goalie and captain Gianluigi Buffon. 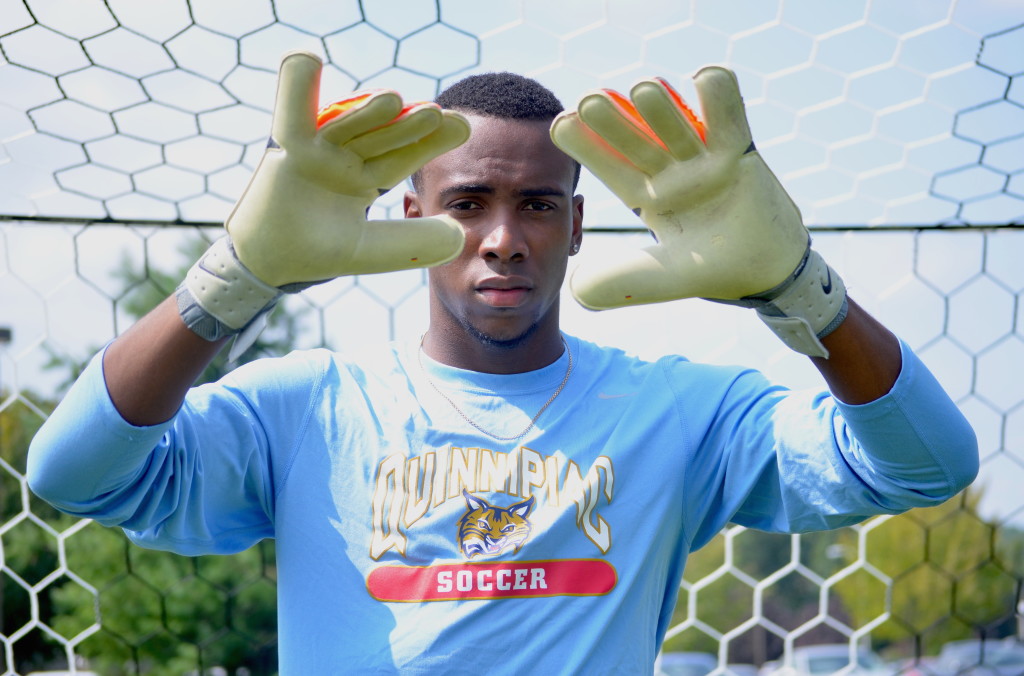 And looking past his skills on the field, Henry also has shown the ability to be a central part of a winning team. In his two seasons at Herkimer County Community College, he led the Generals to back-to-back National Championship victories. Henry’s true prowess in net was evident during the 2013 season, in which he allowed a mere four goals all season and was named an All-American.

“I take great pride in my time at Herkimer,” Henry said. “I was able to refine my game, and I learned what it takes to maintain a winning mentality. I want to bring this mentality with me, and hopefully win a couple more championships.”

Following his time in junior college, Henry transferred to the University of Connecticut. Unfortunately, Henry didn’t fit into UConn head coach Ray Reid’s plans, as he puts it. He didn’t play during the 2014 season.

Still, Henry feels his time in Storrs was a growing experience

“I had a good experience at UConn, even if it unfortunately didn’t work out the way I may have hoped,” Henry said. “While I was there I did learn a lot about myself as a person and as a player, and I hope to bring some of the professionalism of a program like UConn to Quinnipiac in my time here. We have to take every moment seriously and we will take our game to the next level.”

After last season, head coach Eric Da Costa saw an opportunity to bring Henry to Quinnipiac. Da Costa tracked Henry while back in his hometown of Toronto and followed his progress at Herkimer. Da Costa also got help from former Quinnipiac forward Raphael Carvalho, who also played at Herkimer.

“We are very happy to have landed a player who has been on our radar for such a long time,” Da Costa said.

Henry also credits Carvalho as the reason he is currently at Quinnipiac.

“While I was playing at Herkimer, [Carvalho] was one of my teammates,” Henry said. “After I decided I was going to leave UConn, he told me that Borja was graduating and the team needed a new goalkeeper, and everything just worked out perfectly from there.”

Henry has done plenty to justify Da Costa’s confidence in his short time here. In his first three games for the Bobcats, he has recorded a clean sheet and has stopped 22 of the 25 shots he has faced thus far.

“He has had an almost seamless transition,” Da Costa said. “By coming in during spring semester last year, he has had more time to adjust to his teammates, as well as get some game time in spring. Now that the season has started, the extra time Triston spent with his teammates is really paying off, as he looks super comfortable out there.”

So far this season, Henry’s play has been crucial to the Bobcats, who have had trouble scoring. In fact, Quinnipiac hasn’t scored yet in its first three games.

Perhaps his best performance to date came on Aug. 31, when he recorded a six-save shutout against UConn, his former team.

“[UConn] was a huge game on the schedule for me, and I am happy we got to get it out of the way early,” Henry explained. “While I obviously would have liked to win, I was happy with how we played and shutting them out felt great.”

There are huge expectations for the Bobcats this year. After a disappointing showing in the MAAC tournament last year, many expect them to not only contend in the tournament, but to finish with the regular season title as well.

If this scenario is to play out, it will be essential that Henry helps carry Quinnipiac to that point.

And if Triston Henry’s first few games are any clue, things are looking up