A London Army Under Fire 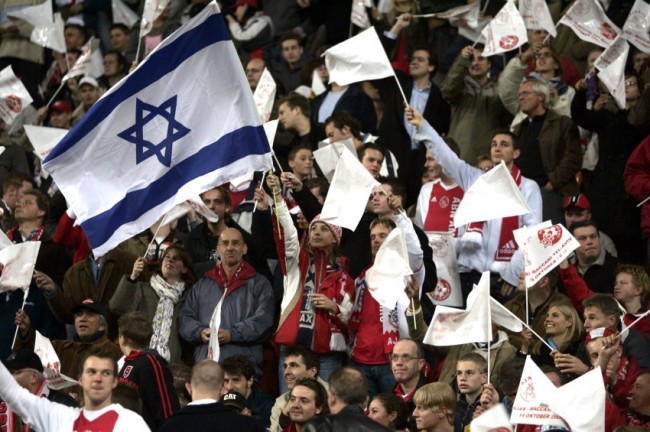 Currently in London, an army is under fire.

The Yid Army, the proud fan base of one of England’s top-tier soccer teams, Tottenham Hotspurs, has come under scrutiny from not only the English Football Association and opposing fans over its nickname and cheers, but also from local police.

Three fans were charged earlier this year with using the word “Yid,” a term often considered offensive, at the team’s matches. Although the charges later were dropped, magistrates said that the ruling would not impact future cases in other circumstances, according to The Guardian

This problem is not just affecting the United Kingdom. The legendary Dutch team, Ajax, has encountered similar issues with its fan group, The Super Jews.

Fans of both clubs historically incorporate Stars of David into their banners and posters, and many supporters adorn them selves in Israeli flags with their club’s logo on it. Others have something written in Hebrew on their shirts and jerseys. During matches fans from both clubs also infamously use songs in Hebrew, such as “Hava Nagila,” as fight songs.

“Many times in the stands of White Hart Lane, you see people with Israeli flags and Stars of David. It is fantastic,” said Rolfe Jones, president and co-founder of the L.A. Spurs, the local branch of the Tottenham fan club.

From the beginning, both Tottenham and Ajax gained reputations as “Jewish clubs” due to their locations in predominantly Jewish regions. Amsterdam was referred to as “Jerusalem West” during World War II, and De Meer stadium, Ajax’s original home arena, was located in eastern Amsterdam, where most of the city’s Jews lived. In the case of Tottenham, many Jewish immigrants to London in the 19th and early 20th centuries settled in the East End of London, where Tottenham played their early home games. Today, many Jews still prominently support both teams.

“The terminology was used almost as a banner of pride, and as a way to differ from the other North London clubs,” explained Grant Simmons, an Encino resident and avid Tottenham supporter. “Yiddo Army had nothing to do with religion, but was purely location-based.”

Over the last two years, officers have begun arresting fans at Tottenham games for “Yid” chants or for signs, as well as opposing fans with hatful chants and hissing noises — a reference to the sound of gas at death camps — and were charged with knowingly committing a hate crime.

“English soccer for a long time would feel anything said in a stadium was fair game, and unlike how they would act in real life, while in the last few years people have become held to a higher standard,” Yahoo! Sports soccer writer Martin Rogers told the Journal.

“You have thousands of fans singing in unison, and when it is to support their team it can be a beautiful thing, and not on many occasions, but sometimes the songs and chants can turn vicious and hurtful.”

The Community Service Trust (CST) in the United Kingdom, an organization dedicated to preserving and protecting the British Jewish community, released a statement on its website condemning the behavior.

“Clearly, any effort to rid the game of anti-Semitism has to start by focusing on the anti-Semites,” it said. “People chanting about Hitler or making hissing noises should be arrested, charged and banned for life. There are some good examples of clubs taking this sort of action, and others where the punishment has been far too weak.”

However, the statement also said: “If Spurs fans did not sing about being ‘Yids’ then it is likely that there would be much less anti-Semitism in football grounds than there is. It is part of the dynamic of football crowds that if one set of fans sing about a particular part of their identity, opposing fans will twist it back against them,” he said. “When Spurs fans sing about being ‘Yids’ it encourages opposing fans to think that ‘Yids’, and therefore Jews, are a subject that it is OK for them to sing about too, but in an abusive way.”

When contacted for comment, the local branch of the Anti-Defamation League said its views mirror those of the CST.

In September, the English Football Association also made a statement, decreeing, “In light of the historic and contemporary use of the term, The FA considers that the use of the term ‘Yid’ is likely to be considered offensive by the reasonable observer… use of the term in a public setting could amount to a criminal offense, and leave those fans liable to prosecution and potentially a lengthy Football Banning Order.”

Despite then-manager Andre Villas Boas claiming that the club would cooperate with the league, the term remains very much in use to this day.

Meanwhile in Amsterdam, Ajax and its fan base, the Super Jews have been targeted for its “Jewish” identity, as opposing fans have started using harsh anti-Semitic chants at matches, such as “Ajax, all aboard. Next train to Auschwitz.”

Los Angeles resident and Ajax fan Peter Erickson spoke about how he felt the issue with anti-Semitism isn’t the Super Jews, but the opposing fans — who also have been gaining the attention of authorities.

“The Ajax fans act out of a respect for the culture and a love for the club,” he said.