Despite holding a lead that would stand for most of the game, No. 8 Quinnipiac women’s ice hockey tied No. 10 Princeton 1-1 at the High Power Solutions Arena Friday evening.

With the score tied 0-0 during the first period, the Bobcats were looking for the play that would put them in control versus Princeton.

That play would come in the form of a Meghan Turner goal. Turner’s fourth goal of the season came after she slotted the puck past Tiger’s goaltender Kimberley Newell for the 1-0 lead.

With the goal, Turner has now scored in consecutive games. 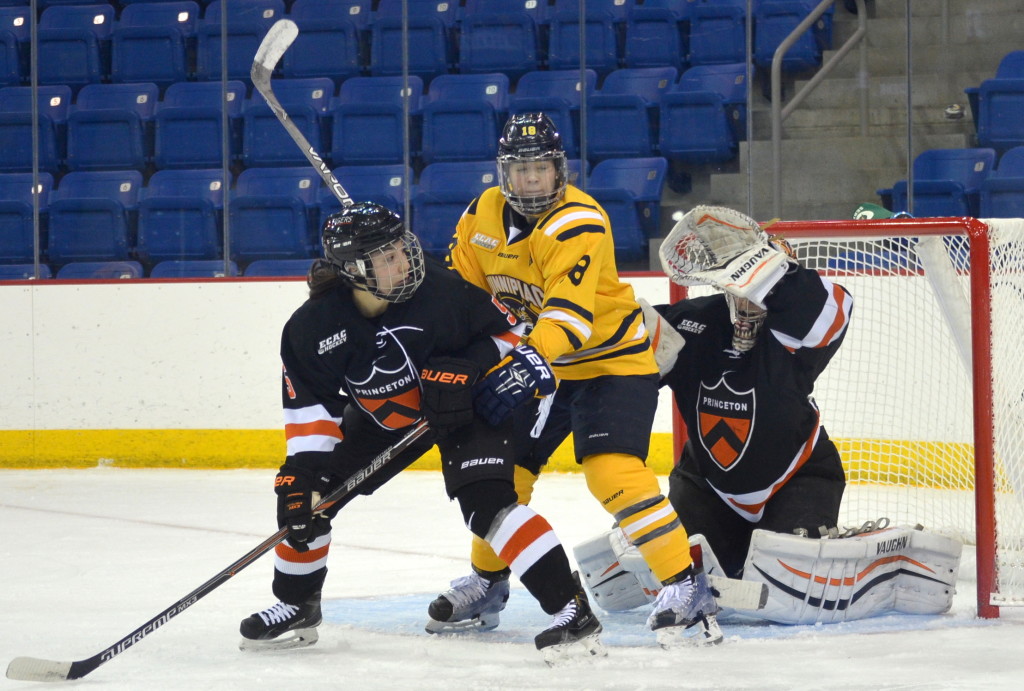 “I think that getting in front of the net, screening, and being gritty are some of my strengths,” Turner said. “In the past I think I may have been a little more complacent, but now I’m trying harder to bear down and put them into the net”

The Tigers would not go down without a fight, though, as the Tiger’s Karlie Lund would slot her own shot past Sydney Rossman and bring the score even with 7:20 remaining in the third period.

The score remained tied at 1-1 at the end of regulation, becoming the second of the Bobcats last three games to reach overtime.

In overtime, the momentum swung in Princeton’s favor early, but Rossman made a few big saves for the Bobcats during the extra period.

The Bobcats would have three shots of their own in overtime, but none found the back of the net and the game ended in a draw.

After the game, captain Cydney Roesler discussed the team’s need to improve holding onto a lead.

“It was tough tonight because we had the lead and we lost it in the third,” Roesler said. “We have to be better at keeping a lead and being able to hold them off. We know it is something we need to improve on, and it is something we will definitely be working on.”

Even though the game ended in a tie, the Bobcats outshot the Tigers 30-21 in the contest.
Bobcats head coach Cassandra Turner spoke of the team’s struggles to finish chances.

“We need to score,” Turner said. “We had some good scoring chances, but we need to bury those. We need to take those chances more seriously, and find a way to put them in the net.”

“We have that ability on this team, I think each individual just need to feel a little bit better to be able to put those shots into the goal.”

Another area in which the Bobcats struggled was on the power play. Quinnipiac was unsuccessful on all four of their chances and only mustered nine shots.

“I thought there were some good things with our power play, but it takes time to build chemistry up when you make a few changes,” Turner said. “We still really like the changes that we’ve made, and I think that watching the video and getting them more comfortable playing with one another will help fix the issues.”

With that tie, the Bobcats were now 6-1-3 on the season, and 2-1-2 in ECAC conference play. These two teams met again Saturday night, as the series shifted to New Jersey. The Bobcats would correct their mistakes, and beat the Tigers 4-2, behind a pair of goals from Roesler.

The win and draw would not affect the Bobcats place in the polls, as they remained in the 8th spot in the USCHO.com polls that were released this week.